Do we dare to question economic growth?

First published at The Guardian on 13 October 2014.

We’ve all been so effectively sold the line that endless growth is essential to maintain and improve our quality of life. This couldn’t be further from the truth.

The planet has finite resources.

The endless pursuit of economic growth is making us unhappy and risks destroying the Earth’s capacity to sustain us. The good news is that taking steps to make our lives more sustainable will also make us happier and healthier. Would you like a four day weekend – every week?

I’ve been to two conferences over the last year with similar basic premises. The first was at the Australian National University on ecological economics and the second, just last week, was on steady state economics at the University of New South Wales. The premise sitting behind both of these conferences is simple and undeniably true yet undermines so much that is fundamental to our current way of life:

We live on a finite planet.

That’s it. How, you might wonder, can such a simple statement of obvious fact undermine the tenets of modern society?

The earth is a giant rock, hurtling through inhospitable space surrounded by a very thin film of life sustaining atmosphere. Earth’s life support systems are self-sustaining and self-regulating. However, we humans are slowly and steadily pulling this life support system to pieces. Our planet is very large and can absorb a lot of tinkering with its systems, but there are now over 7 billion of us and the amount of energy and resources we are each using is growing fast. That’s a lot of tinkering.

There’s plenty of evidence that we are pushing up against and exceeding several critical boundaries of global sustainability: by which I don’t mean some tree hugging idea of sustainability, I mean we are taking actions that cannot be supported by the earth’s systems in the long term. We’re already exceeding the earth’s adaptive capacity with respect to greenhouse gas emissions, biodiversity loss and the nitrogen cycle and we’re approaching critical limits in both the phosphorous cycle and ocean acidification. Our use of fresh water is also approaching or exceeding sustainable limits in many parts of the world and we’re systematically destroying our arable land. These are critical life sustaining global processes that cannot be ignored without severe consequences. 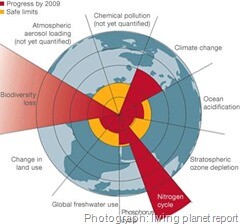 The Living Planet Report illustrates what we know about our impact on global processes.

Economists, like the nobel prize winning Paul Krugman, will counter this line of thought by pointing out that, theoretically, we can have endless economic growth because of continuous efficiency increases. If you believe human creativity is endless then you can argue that economic growth can be endless. However, in this case, like in so many, reality clashes violently with economic theory. We are showing no signs of decoupling economic growth from physical resource use. Unless that decoupling starts now and happens in a hurry, continued economic growth will push the planet beyond its capacity to sustain us – on several fronts.

You may be surprised to hear that there’s really good news in all this. None of the stuff we’re doing that’s destroying the biosphere is making us happy. By contrast, changing to a more sustainable way of living will also bring us greater happiness and general wellbeing. Seem too good to be true? That’s because we’ve all been so effectively sold the line that endless growth is essential to maintain and improve our quality of life. This couldn’t be further from the truth. Material prosperity has diminishing returns when it comes to happiness and wellbeing. Once we have good access to food, shelter, healthcare and other basic material things, the nature of the community in which you live and the quality of your relationships is the best predictor of wellbeing. More stuff only makes a very marginal difference. 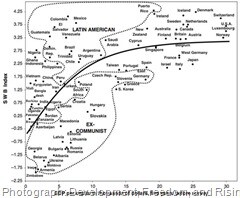 First we have to do something about the price of housing. People cannot be freed from the earth destroying and soul destroying rat race when simply securing a place to live means a lifetime of debt peonage to the banks (or paying absurd rents to somebody else so that they can give it to the banks).

Once this is done, we need to understand and promote the value of leisure and the lack of benefit we get from material consumption. Retail therapy only ever works in the very short term. Real friendships work for life.

How about a three day work week with a four day weekend? It can be done. Productivity improvements can be directed into allowing people to work less for the same pay instead of into corporate profits and expansion. It’s not written in stone that you always have to work as hard as you can for as long as you can so that some senior executive can get his million dollar bonus. Instead, work for or set up a not-for-profit cooperative where the workers own the business and can spread the benefits any way they see fit. It’s true that if we work less and buy less the economy may shrink but we’ll all be happier and healthier. Here’s something you won’t hear from many politicians or economists: the economy should serve us, not the other way around.

Think about that three day work week. It is possible and the only reason we don’t do it is because it doesn’t suit the ambitions of the empire builders, the 1% who control so much of the wealth and the political power. Their system requires our consent and participation. They can be beaten if we simply stop believing their bullshit and prioritise our own wellbeing and that of the planet. It’s both that simple and that difficult.

Warwick Smith is a research economist and freelance writer. He blogs at reconstructingeconomics.com and tweets @RecoEco.

2 Responses to Do we dare to question economic growth?