ISSC to merge with ICSU to create International Science Council 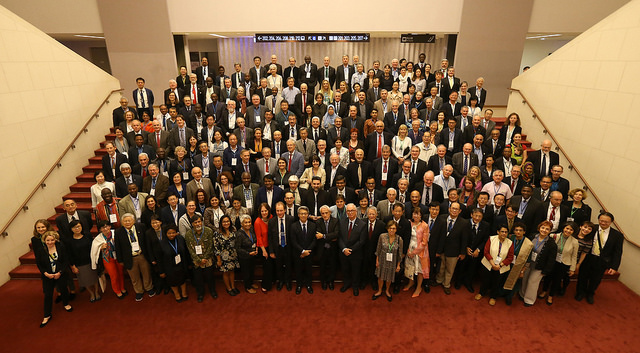 World’s leading bodies of social and natural sciences agree to merge in 2018, forming the ‘International Science Council’ to serve as the global voice for science

At a historic joint meeting, members of two leading international science councils voted to merge, launching a process that will see the formation of a single global entity uniting the scientific community, including all social and natural sciences.

Taipei, 26 October 2017 – Members of the world’s leading international science bodies agreed today in a historic vote to merge and create the “International Science Council”, a unified, international organization whose vision will be to advance all sciences as a global public good.

The agreement took place at a landmark joint meeting in Taipei of the International Council for Science (ICSU) and the International Social Science Council (ISSC), with members voting overwhelmingly to form a new organization that provides a strong foundation for advancing science across the disciplinary spectrum and in all parts of the world, and promoting its vital role in shaping humanity’s future on planet Earth.

The new Council, whose head office will be in Paris, France, brings together the current members of ISSC and ICSU, including 40 international scientific unions and associations, and more than 140 national and regional organizations such as academies and research councils.

The organization will be launched at a founding General Assembly to be held in France in 2018, with a mission to serve as the global voice of science, providing leadership in catalyzing, incubating and coordinating international action on issues of major public concern. To mark the occasion, the new Council will inaugurate a new interdisciplinary international science summit which will be a flagship event.

Alberto Martinelli, President of ISSC, said: “This vote comes at a crucial moment for science. Now more than ever before, a powerful and credible voice is needed to advocate the value and values of all science to society. The challenge of living sustainably and equitably in a rapidly changing world means that the need for scientific understanding has never been greater. The unified science council will champion all the sciences and their role in responding to today’s global challenges.”

Gordon McBean, President of ICSU, said: “ICSU has been a pioneer in the 20th century for interdisciplinary science programmes and policy impact. I am immensely proud that our members have voted to endorse this historic merger which carves out a new space for our proud historic legacy – to be the global voice of all sciences in a digitally connected world.”

The final vote count in favour of the merger was 97.64% for ICSU and 90% for the ISSC. It came at the end of two days of intensive discussions on issues ranging from the new strategy, statutes and governance arrangements and the legal framework.

Today’s vote paves the way for the start of the legal implementation phase which will include the finalization of a merger treaty which contains the new name, Statutes and Rules of Procedure. Members of both Councils will endorse this treaty in an electronic vote scheduled to take place in the first half of 2018, and a new, merged Secretariat will be put into place at the organization’s headquarters in Paris.

Commenting on the outcome, Philip Campbell, Editor-in-Chief of Nature said: “I welcome such a merger because it reflects the inevitable and essential greater proximity and even joining up of all branches of research to achieve new intellectual and societal aims. We, in the Nature group of journals, are moving in exactly the same way.”

The decision to create the International Science Council follows a joint meeting between the ISSC and ICSU in October 2016, at which members of both organizations voted overwhelmingly in favour of an in-principle decision to merge the two councils, and formed working groups to draft a strategy and statutes for the new organization. That vote was based on the recommendation of a joint working group on the relationship between the two Councils which worked between December 2015 and June 2016. Their final report recommended a merger, and this was subsequently endorsed by the executives of both organizations.

Helga Nowtony, Chair, ERA Council Forum Austria: “I warmly welcome a merger of ICSU and ISSC – it is an idea whose time has come. The merger of these two highly experienced international organizations offers enormous complementary potential in addressing some of the most pressing issues of our time. Science as a unique public good can – and must – offer actionable knowledge, advice and guidance.”

Craig Calhoun, President, Berggruen Institute: “The merger of ICSU and ISSC brings a welcome unity of science and a new level of global cooperation to help face the enormous challenges before humanity – and before the planet.”

About the International Council for Science

The International Council for Science (ICSU) is a non-governmental organisation with a global membership of national scientific bodies (122 Members, representing 142 countries) and International Scientific Unions (31 Members).

About the International Social Science Council

The International Social Science Council (ISSC), a membership-based non-governmental organization, is the primary global body representing the social sciences, including economic and behavioural sciences. Its mission is to strengthen social science to help solve global priority problems. Through its members and programmes, the ISSC reaches hundreds of thousands of individual social scientists working across a wide range of disciplines and representing all parts of the world.

This entry was posted in News, News - Other and tagged ICSU, international science council, ISSC. Bookmark the permalink.